Continued from the DreamTR topic.

Thanks drx, lemme write up some more details about this game. Maybe this will jog a few memories.

Mystical Ninja Starring Goemon (がんばれゴエモン～ネオ桃山幕府のおどり～, Ganbare Goemon ~Neo Momoyama-Bakufu no Odori?, lit. "Go for it, Goemon ~Dance of the Neo Peach Mountain Shogunate~") is a video game released by Konami for the Nintendo 64 on August 7, 1997 in Japan and April 16, 1998 in North America as the fifth entry in the Ganbare Goemon series. The second Goemon game released in North America, it follows Legend of the Mystical Ninja and features hybrid elements of platform games like Super Mario 64 and action-adventure games like the Legend of Zelda series.[1]

The story follows Goemon's struggles to prevent the Peach Mountain Shoguns gang from turning Japan into a fine arts theater. The plot calls for three cinematic musical features and battles between giant robots; like other Ganbare Goemon games, it's peppered with surrealist humor and anachronisms.

Screenshots of the game in action (not from prototype): 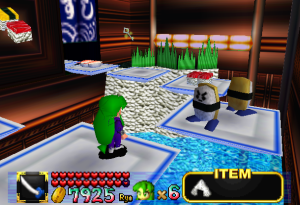 Prototype (probably not from the prototype we're getting, but we're hoping):

Details about the prototype itself:

We still don't know a lot about the prototype itself, other than it's a Mystical Ninja 64 prototype and it ranges for $300 for the rom dump + $50 for shipping. However, we might get something worth while out of this if we try.

Currently as of posting time, we have about $270 to go (me + zero7 from u64 - i think). I think the best thing to do to insure we don't over pay for the prototype is to donate in $20 pieces (or multiples of $20). This is also a good thing so we don't get a serious blow to our wallets if it turns out that the prototype is similar to the final game (in a way).

The only thing to do at a time like this is to donate, get the game, and see what happens. Who knows, it might turn out to be that same exact prototype in the video. :)

I have donated my 20$ for the Goemon 64 dump :) and i have already a couple of friends that will donate. I'll reply to this topic when i'll have their confirmations.

Thanks :) And good luck.
Top

Maybe you should put the word out on the front page of Hidden-Palace, drx. :)

Got $10 from Goemon International, thanks.

As for the front page, I might, in a few days, we'll see.
Top

There's some sort of bug in your "tracking code" so when someone links Hidden Palace in another website, the link does not work:

There was another person interested to donate, but he was not able to reach HP for that bug. (maybe it's just a random error).
Top

Oh, I forgot about that bug. Need to fix it some time :P
Top

I'm on vacation for the rest of this week so internet + budget is very limited for me. When I get back, I'll see what I have left, and I'll donate whatever I have toward it.

btw drx, did you test the gameshark on any games yet?

I've chipped in as well... good luck with the project

$20 from Martin and $20 from Alessandro Bacchetta. Almost halfway there :)
Top

btw, I mentioned this over at 64DD.net. You can look at the topic here:

I wonder if there are other communities that could be interested in this...

evilhamwizard wrote:
I wonder if there are other communities that could be interested in this...

Maybe someone from Assembler, X-Cult or Lost Levels

Not so sure about ASSembler (people there might be interested in buying the thing rather than donating, and they all have the cash to buy it times 100 more prototypes just like it), I don't want to personally post over at X-Cult, but that might be our next best bet.

Someone go there and do it. I'm busy with other things at the moment (vacation etc). :( I'm a huge Goemon fan so this is a hopeful release for me, but I think it's important to consider one thing: This is a Japanese game, and it was released in America almost a year later from the Japan. If this turned out to be the American version of the game(it's listed as Mystical Ninja rather than "Ganbare Goemon", so maybe it is?), then I fear it's likely this won't be much more than a simple preview build of the English translation of the final product.

I know by reading the main topic that drx can't get the specifics for every game, but maybe just asking DreamTR he might be able to just quickly recall if it was US or JP for us so we can be better assured. Then again, maybe it's only me who's concerned about this...
Top

I agree with bo above :) I know DreamTR's kind of strict with giving info out, but since this doesn't even involve getting the actual game out of his collection but just simply telling us if he recalls or not, I'd think it would be fair to of him to at least help out that much.

There could be hope it's a Japanese rom, just with an English name on it. That still of course doesn't tell if it's the localization on the rom or not(I don't even think the person who found that cart above ever mentioned if there were any differences. I think I know who it is and will ask myself actually...).

Maybe nixonsdog-checkers can fill us in on his thoughts?
Top

drx said that all he could tell me was that it was mystical ninja, but still though, i wish i had more information, like what was actually written on the cart. i'd understand if it had japanese on it and all it said was "Legend of Mystical Ninja". That's another strange thing you have to remember, it was originally "Legend of Mystical Ninja" on the list, but that's the name of the SNES game. The English version of the game was "Mystical Ninja 64: Starring Goemon", and the Japanese version was "Ganbare Goemon ~Neo Momoyama-Bakufu no Odori". However, on the cart of the Goemon's Great Adventure prototype, it says "Mystical Ninja 2" - it was never called that in either Japan or US - but it was in Europe. Strange huh? So "The Legend of Mystical Ninja" might be what it says on the cart, and he can't tell us any more info because the rest of the crap might be written in Japanese (and no one that I know of can easily write in Japanese without taking the time to do it so...). Food for thought I suppose. And even if it's English, keep in mind, debug features are fine and dandy too. They didn't just open up the game in a hex editor to translate it, after all, and localization seems to have been done by the developers themselves - rather than outsource it to someone else. There are a lot of different possibilities, but I know, it's unfair that we can't at least know what's written on the cart - but business is business.

tl:dr, I wish we could get just a FEW more details. I doubt it'd make me withdraw my money, because there's probably more than meets the eye. I know now for a fact that the reason why it's so cheap for a N64 prototype is because he probably couldn't sell the game before, had it for a while, and wants to get rid of it. And for $350, $20 from each user, it's not really a loss if we get boned in terms of what we had hoped for.

Either way, don't worry about it. I'm sure it won't be a bad prototype.

You know what I am worried about? Can drx dump it with the GameShark I sent him (hasn't said anything about testing it, only that he got it in the mail since I left...)...oh god...

ps: also keep in mind, it's sorta acting as a sequal to the snes game legend of mystical ninja (according to Feb 98 issue of Nintendo Power). Another thing to keep in mind, and I don't know this for sure at the moment, but it the title on the cart might be going with what says in the header of the game itself. Like for example, OoT's header was "The Legend of Zelda", not "Ocarina of Time".
Last edited by evilhamwizard on 30 Jul 2009, 22:06, edited 1 time in total.
Top

It was titled that in Europe? Hmm..maybe that Goemon 2 proto is a PAL proto, but has JP on it since as you say they the localization was done with the original developers, who are in Japan. No way to know of course until this is dumped :) I found the guy with that cart btw and messaged him asking if there's any differences. Let's hope he responds :P

And the price...I can't believe you find it cheap lol. I mean Goemon isn't even that popular, I would expect a lower price somewhat. But whatever, it's business and DreamTR's choice and all that stuff and I understand. Hopefully more donaters turn up so we can see once and for all what this is :)
Top

Oh hey, I know who owns or owned these.
Top
Post Reply

Users browsing this forum: No registered users and 2 guests