The earliest available non-demo build of the game. Because this is a preview build, certain content is permanently locked and, as a result, memory editing is required to gain access to any permanently locked content (of which there is quite a lot.)

The Cutting Room Floor research
This prototype has a research article on TCRF.

An incredibly interesting video showcasing a concept of how the game might display the game's rewards, like new cars and Signature Takedowns. 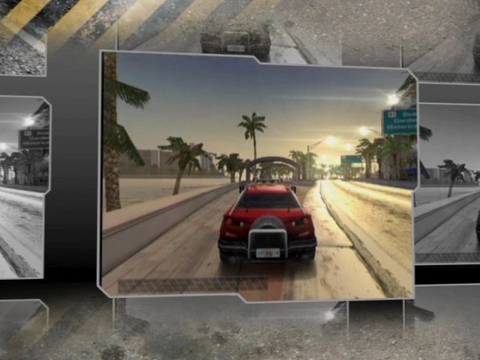 It certainly seemed strange that Sunshine Keys only features one Crash Junction in the final game, and it should come as little surprise that it was going to have more. Interestingly, this Junction is featured several times in the Crash Training video in the retail release.

Crash of the Titans

Not the Crash of the Titans that would eventually appear in the Xbox 360 version; this is a different one entirely! 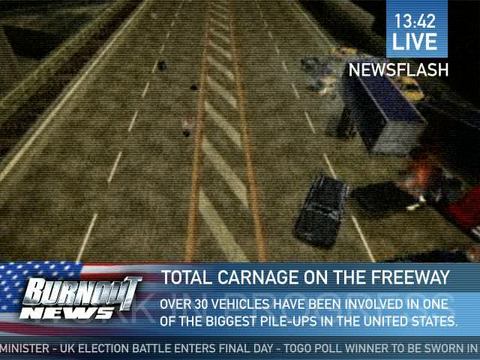 A texture related to a removed "Burnout News" gimmick can be found in GLOBAL.TXD. In addition to this, the same graphic, albeit slightly altered in appearance, can be seen in WIPRWRDS.M2V. Judging by the context in which the Burnout News sequence plays, it seems as though it was meant to be a more 'dynamic' replacement for the Crash Headlines from Burnout 3. In the final game, however, there is no additional damage target to the ones required for each medal.

In the style of the Need for Speed games, you would originally have had to purchase cars using prize money earned from completing races in order to unlock them. In the final game, you unlock new cars by completing certain in-game criteria, such as completing a challenge sheet for a location.